Welcome to Bravechart. Your in-depth article on chart analysis from a Scotsman stationed in the Outback.

As traders, we use technical analysis as a reliable method for speculating on future price direction of both equities (shares) and indexes. Technical Analysis in simple terms is the study of historic price movements in a chart in search of patterns or consistently traded support and resistance levels. Today we are looking at a Double Top.

Appearance:  A double top Looks like a ‘M’ shape and comprises of: 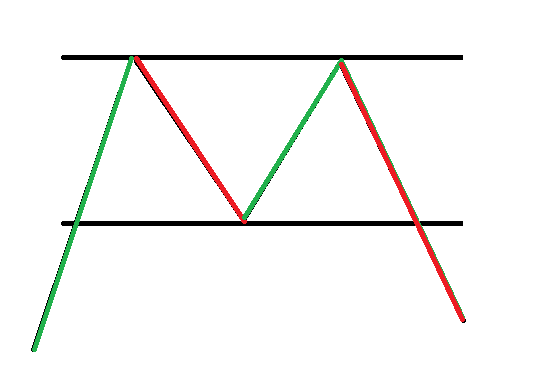 Pattern: The Double Top Pattern is a common chart pattern that can appear after the fact in a bearish market. The idea is to recognise it during the second bounce from resistance, watching the formation early on. Once that support breaks, it is a strong broader reversal pattern, and you can look at managing your positions.

Important Note: The Double Top is only confirmed once it has broken the support level and continued lower. If this doesn’t happen, you would be either looking at a channel forming, or a continuation pattern with further bullish movement.

Rio Tinto a few months ago had this pattern form after a strong rise to roughly $87.00 . As you can see from the below chart, the stock rose up with strong volatility, bounced off resistance, came back down to a support level, once again pushed back up to the previous resistance, and then eventually turned bearish and broke through the support level at $81.50. As you can also see, the stock continued to move lower and has been falling ever since its highs at $87.00 .

There are many ways that you could take advantage of these patterns. As a specialist in derivatives, we are able to profit on a stock when it falls as well as when it rises.

If you would like to learn how to pick a stocks direction, then Join us at our live face to face one day “Technical Analysis, Picking the Direction of a Stock” course.

COVID Update: With the increased restrictions in Melbourne where our office is located we just wanted to mention that all Emerald Financial/TradersCircle services will remain unchanged through this period. Feel free to call an adviser as per usual, everyone will be working from home and future courses will be live-streamed. If you have any questions please call (03) 8080 5788. Stay safe everyone!