Death by taxes…or how do you balance a Federal Budget?

If you think that the Federal Government’s mantra of a balanced Federal Budget is not contractionary for the economy, then you probably would be wrong.

The Government publishes monthly budget figures (www.finance.gov.au), so you can establish the annual growth rates of the various components of taxation.

To balance the budget, you need to increase taxation. Doing the heavy lifting is tax on Individuals. For the 12 months ending August 2019, the increase has been $13.5 billion or 6.3%. Given that most people don’t feel like their pay packets have increased for some time, the tax increase would be squeezing family budgets. Any pay increase would be affected by the higher marginal tax rate caused by bracket creep and the higher costs of health, education and energy bills.

The growth in Individual taxes has been elevated for some time, from 5.5% growth in November 2017 to 9.17% growth in April 2019. The growth can’t be accounted for solely by the low inflation rate and the large migrant intake.

The growth in Company tax was contractionary prior to 2017, but since then climbed to 23% last year, before easing off to a 10% growth rate in August. Company tax rose $8.5 billion over the last 12 months. 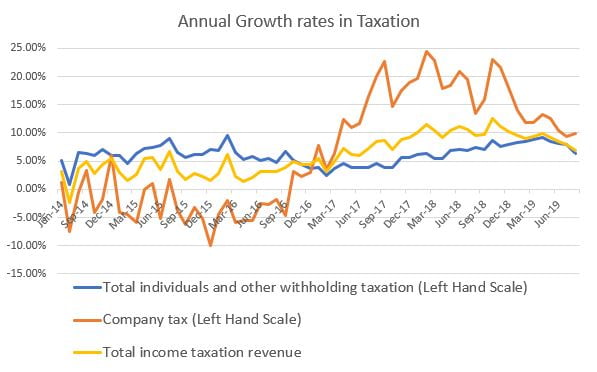 The by-product of squeezed family budgets is contracting consumption taxes (except wine, because we all must drink to forget). The Goods & Services tax (GST) is a great bellwether for consumer spending (because it is consumer spending, except health and education).

The annual growth rate of GST has fallen 9% from three years ago to a near stall speed of 0.5%. Think about this before you look to buy those retail stocks that are already trading at high price earnings ratios.

The Luxury car tax has plummeted from a 10% growth rate at the beginning of 2018, down to a contraction of 7.50% in August 2019. The luxury car tax was designed to help fund the local car industry and local jobs, but the Government now keeps the $686 million and lets us buy only imported cars with borrowed money.

Overall, indirect taxes are still growing at 6%, but the trend is down.

Recent press reports have been questioning the Government’s fiscal stance of budgetary contraction.

This is from Ross Gittins (Economics Editor – SMH) who expresses it quite well: “The Prime Minister doesn’t get that if he keeps playing politics while doing nothing to stop the economy sliding into recession, nothing will save him from the voters’ wrath…. How could a second financial year of weak growth possibly leave the budget with a big surplus? Because of the miracle of continuing bracket creep and iron ore prices kept high by BHP’s dam disaster in Brazil….. If there was any doubt about the likelihood of continuing weakness in our economy – independent of any adverse shock from abroad – it was swept away last week. The International Monetary Fund forecast real growth in Australia’s gross domestic product of just 1.7 per cent this calendar year, improving only to 2.3 per cent next year.”

COVID Update: With the increased restrictions in Melbourne where our office is located we just wanted to mention that all Emerald Financial/TradersCircle services will remain unchanged through this period. Feel free to call an adviser as per usual, everyone will be working from home and future courses will be live-streamed. If you have any questions please call (03) 8080 5788. Stay safe everyone!